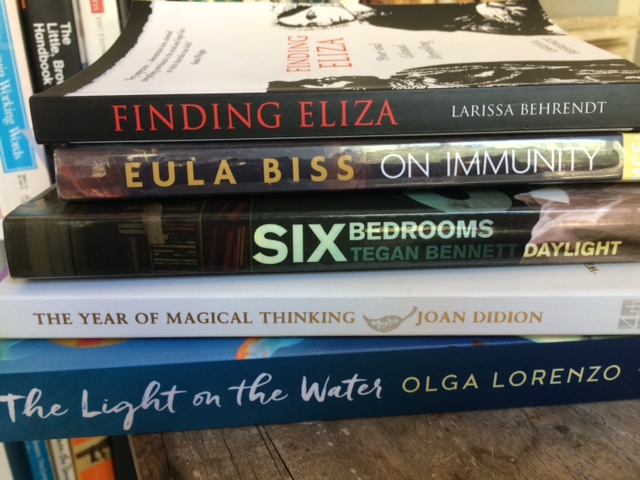 I have a new writing nook, cleverly created by my fella with the Ikea goods I brought home from an adventure I nearly aborted (why oh why do we always forget how tricky it is to fetch and bring home flat pack goods that are longer than we are tall while wrangling small humans?). I am overjoyed at my new space, and procrastinating by planning shelves that will help me organise my crazy world of books.

At this stage my categories are: In Progress, To Read When I Get a Moment (the To Read Immediately books continue to make a teetering pile on my bedside table), Recently Read, To Assist with New Project (which I am not writing because there is too much to read), To Lend, To Return, and the important – Just Bought Because I Had To But Not Likely To Read Until Next Summer… It’s a work in progress.

So, before I misplace those on my Most Recently Read list, here’s what I’ve been reading lately:

Aboriginal writer, Behrendt, explores the story of Eliza Fraser who was shipwrecked on the island of the Butchulla people in 1836. She uses this story as an example of how Aboriginal people have been portrayed in the stories of colonisers throughout history. I found this enormously helpful as I grappled with editing the final stages of my own novel, and thinking about how, as a non-Aboriginal writer, I have written Aboriginal characters. Clever, thought-provoking – one I will read again.

The Light on the Water, Olga Lorenzo.

Such a pleasure to read this highly anticipated novel by Lorenzo, whom I am lucky enough to have had as a teacher at RMIT. In it, she tells the story of Anne, two years after she has lost her daughter while walking at Wilsons Prom. Anne is charged with her daughter’s murder and Lorenzo leads us through Anne’s inner world as she is shunned by her community, while she desperately tries to reconstruct what happened and uphold her remaining relationships. I found this taut and complicated and terrible territory to be taken to, but like Charlotte Wood has done in The Natural Way of Things, Lorenzo guides you through the oppressive anxiety and heat of the story until it’s well crafted resolution. Highly recommend.

This was recommended to me, and I initially resisted – I had no interest in getting myself worked over a topic that was already making me mad every time I encountered it on social media. But this is a clever, thoughtful, beautifully crafted exploration of the social and cultural history of immunity (along with the science), that Biss weaves through with her own narrative of new motherhood and the fear and confusion she encountered around vaccination. Meticulously researched and unexpected. Well worth a read, even for those who feel they have nothing more to learn on the subject.

Stella shortlisted, this collection of ten short stories takes the reader into the lives of teenagers and those entering adulthood, in the most gentle and fierce of ways. Some of the early stories dragged me straight back to the awkward madness of the teenage years and the last story in the collection, ‘Together alone’, left me gasping. Add it to your To Read list if it isn’t there already.

I am loathe to admit this was my first encounter with Joan Didion. I am now trying to ‘catch up’ on her extraordinary body of work. This is the memoir of the year after the unexpected death of her husband of over forty years. It is extraordinary. At times, Didion holds her grief at arm’s length to observe and analyse it, and then she takes the reader with her into her free fall into the ‘magical’ thinking, where she believes she can not get rid of her husband’s shoes, because he is coming back. Heartbreaking and intelligent. I’m so thankful I now have Didion in my reading arsenal.

Thanks Katie – you have instantly made my teetering piles truly precarious!

I’d love to know what’s on your piles too, Jane! Can never have too many recommendations… Hope all is well in your world x