There is a draft of a post from Ubud. I started it as I looked out over the jungle from my little perch in our balinese villa. 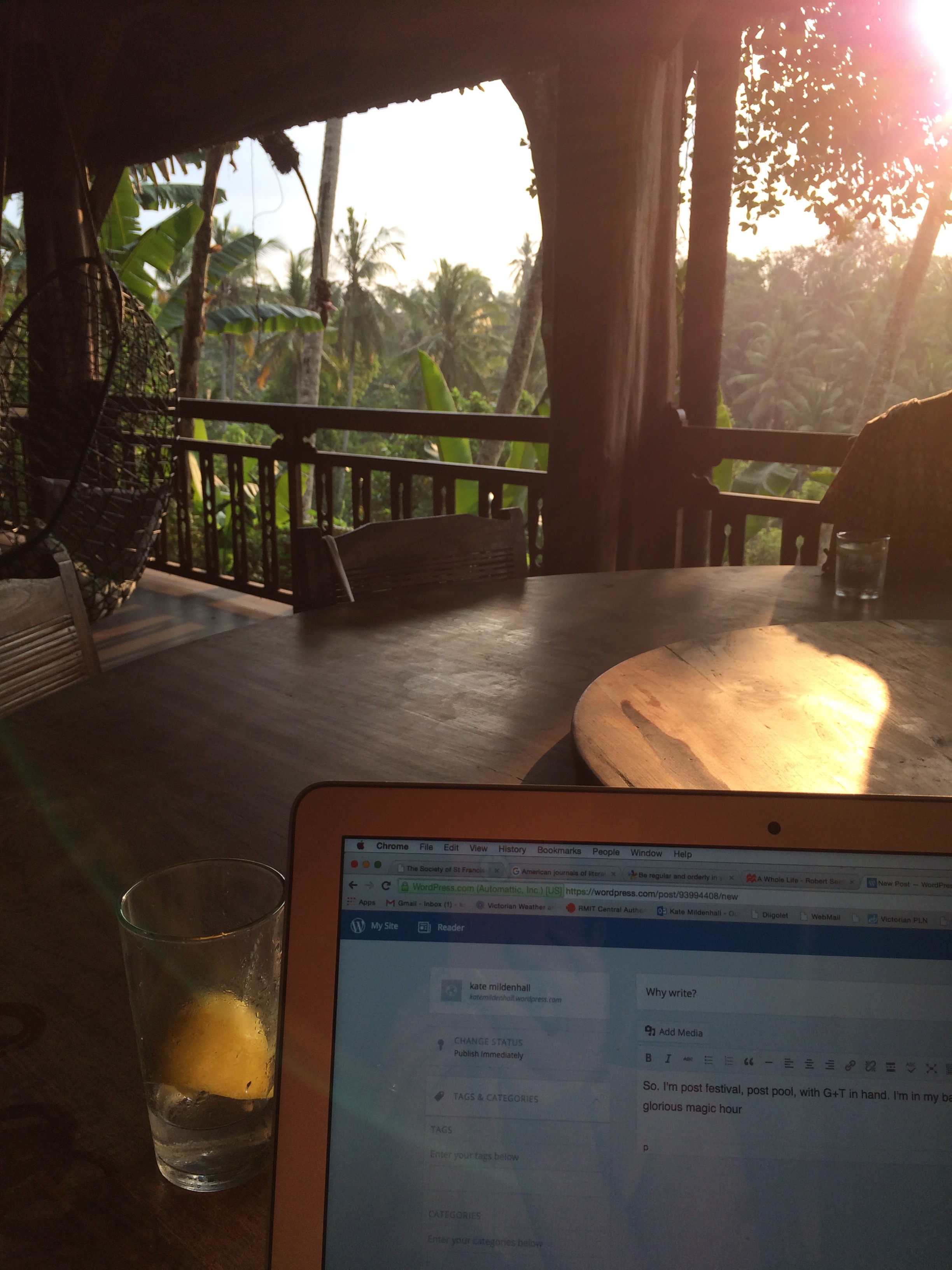 The view from here is not quite so satisfying. I am dashing this off before I pick the kids up from kinder and child care. It is a task in a list that includes dishes and washing and cooking and filling in kinder forms and dancing re-enrolment and uploading photos so I can start on the Christmas books. Thinking about Christmas obviously leads to a slight panic attack and frenzied online searching and list making… There is no room for writing today, I tell myself, but then I read Rowena Tuziak’s post about life getting in the way and putting the writing first, and I decide I have to make room. I have to choose to make room.

When I last wrote here I dangled the cliff hanger – will she or won’t she be able to finish the draft while she sits by the pool drinking cocktails in Bali?! The short answer is no. No, I didn’t finish the draft then, but I worked hard in the bits between classes and panels and nights under lanterns strung in garden jungles filled with interesting people and conversation and Bintang. I worked between listening and learning from writers like Brigid Delaney, Clem Ford, Liam Pieper, Deddy Arsya, Emily Bitto, Antonia Hayes, Sofie Laguna, Okky Madasari, Amanda Curtin, Nam Le and Isa Kamari. I could not work after People of Letters because I was so emotionally wrecked. It featured, among others, Chigozie Obioma, Ayelet Waldman, and Finegan Kruckemeyer, upon whom I developed an instant writerly crush both because his words were so perfectly crafted and because he spoke about cradling his baby when I was so missing mine. There were tears.

I worked, fuelled by the insights and conversations about writing as a political act, about how fiction can change minds, about how history can be viewed through different lenses, about friendship and feminism and corruption and writerly angst.

And I worked in a house filled with the most interesting and extraordinary group of women brought together for the masterclass. I was the baby. And gee – I’ve got so much more to learn. About writing and books and life and networking and parenting and business and grief and the things that scare us and the things that bring us joy. Also about how to break into a locked compound in Ubud when the door has been unexpectedly locked and it’s late and there have been beers involved (but that’s not my story to tell!)

I wish I had seen more of the panels, especially the local ones in the light of the censorship issues. I wish I had talked to more of the writers. I wish I had explored more, stayed out later, got up earlier, eaten less, drunk less, drunk more, even… Some part of me wishes I had got stuck by the fickle volcano dust so that I could have continued to write in the glorious surrounds of Ubud. But then I think of how my four year old daughter greeted me with the words ‘Mum, I was so excited to see you today that my eyeballs nearly popped out of their sockets!’, and I know I would have been frantic to be away from them for much longer.

I didn’t finish working on the draft in Ubud, but I did finish it when I got home (although I use the word ‘finish’ loosely). I have sent it off to my editor. And I nervously await her comments. What if it isn’t the thing she thought it would be, says the little voice of self-doubt. What if it isn’t any good after all? I know that voice now and know that nearly every writer carries it within them and they try and find ways to ignore it. Or they use it to push them forward and through the hard work of tearing apart their manuscript, building it back up again piece by piece, making it as good as it can be.

When asked ‘Why write?’ on one of the panels in Ubud, Liam Pieper quoted Hemingway’s advice (or not Hemingway’s – depending on who you listen to): ‘Write drunk, edit sober’. Ubud, and Varuna before it, have been part of the glorious ‘drunkness’ and uninhibited creativeness of the writing process of ‘Skylarking’ so far. Now for the editing, and some serious sobriety.

Thanks Meg x I’m lucky to have people like you for support! xx

Oh my goodness, I am so excited for you! I don’t care how loose the term is – you have finished your manuscript (edits aside). A great big congratulations! Thanks also for mentally whisking me away to Bali with your beautiful post. Good luck with the analogous sobriety!

Thank you Rowena x Hope your writing is on track!

Well said Kate, for all writers. And that which is read effortlessly has been the most difficult to craft, therefore enjoy the pain so that your readers will thank you.