I’m trying to get more ‘present’ (aren’t we all). I’ve nearly done my thirty days of morning meditation (not consecutive unfortunately – but my app doesn’t seem to mind). I’m a fan of the Slow Your Home podcast. I’ve read the books on Mindfulness. There are even great drifts of household refuse piled up in corners of my home, testament to the fact that today I read books with the kids under the doona while it poured, and then went and threw bark in the creek when it stopped, instead of sweeping and washing and tidying and cooking and sorting clothes.

And I’m reading Natalie Goldberg’s ‘Writing Down the Bones’, a most excellent book on writing that I picked up in an op shop years ago but only just opened. She enthuses about a certain ‘presentness’ that must be accessed to really get to the bone 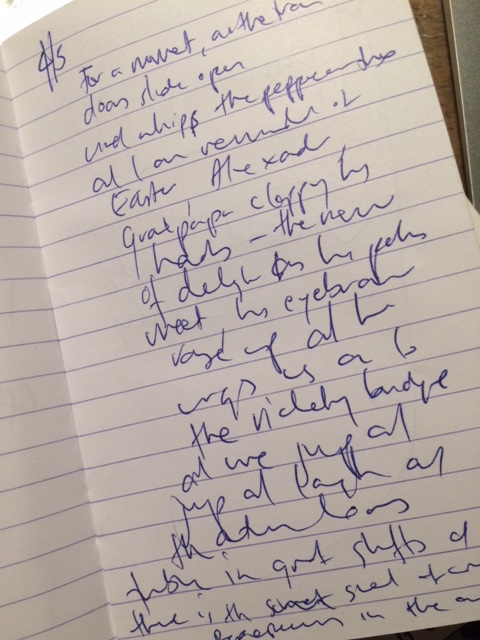 s, the truths of the writing. There are metaphors about cake baking and heat, about compost, about meditation. I am finding all of it incredibly useful. I was reading it on the train and got so inspired by her idea of being in the moment and bringing the writerly mind that I scribbled down a poem there and then – something I haven’t done in a long time (and lucky for all – indecipherable).

I am trying to write a novel. My second – so I thought that I might have some idea about how to do it. The first is here on the desk next to me, all of its pages nestled in the cover, yet to fully meet the world, but as done from my end as it possibly can be. I should have known I suppose, I’ve read other writers lament that one novel doesn’t make you an expert, in fact ten novels doesn’t. I thought at least I’d have a sense of what to do. But it’s such a different beast this one. Last time, I had a road map, a true event, characters, a time and a place: it was hard going yes – but it had a certain pressure, a force behind it which compelled me to write it down. Perhaps this particular story just hasn’t built enough of a head of steam on it yet.

I think I’m forcing it. Goldberg writes of ‘first thoughts…the way the mind first flashes on something’. Her list of rules for writing exercises includes:

There’s something I want to say, and a way I want to say it and I’m trying to control what can’t be controlled. I can’t find names for my characters – I keep leaving blanks or changing them, I don’t know the rules about this. Do I name them first? Give them ages? What about the scene that is so vivid, so intense that I can hear the characters whispering in the dense tropical air, feel the crackling friction and desire between them, sense the sleeping children in the room behind the door – how do I get them there? I’m so hamstrung by the thinking, the logic of it all, that it feels an impossible task.

Nevertheless. I’m going to try and take Goldberg’s advice. Try and find that place – like Csikszentmihalyi’s ‘flow’ or in the midst of my Varuna bliss – where the words feel like they come through me and not from me – as though I were channeling them from somewhere else entirely. Sounds a bit absurd, I’m the first to admit, but it really is something else when it’s all going right. It’s why we do it.

“When you are present,” Goldberg quotes in her book, “the world is truly alive.”

I hear you. It will come. I’m sure it will xx

Writing Down the Bones is a wonderful book. I think it was the first book I owned on writing. Loved reading about it again and its pearls of wisdom x

I’m loving it! So many post it notes sticking out everywhere. Hope you are getting writing time on the road x